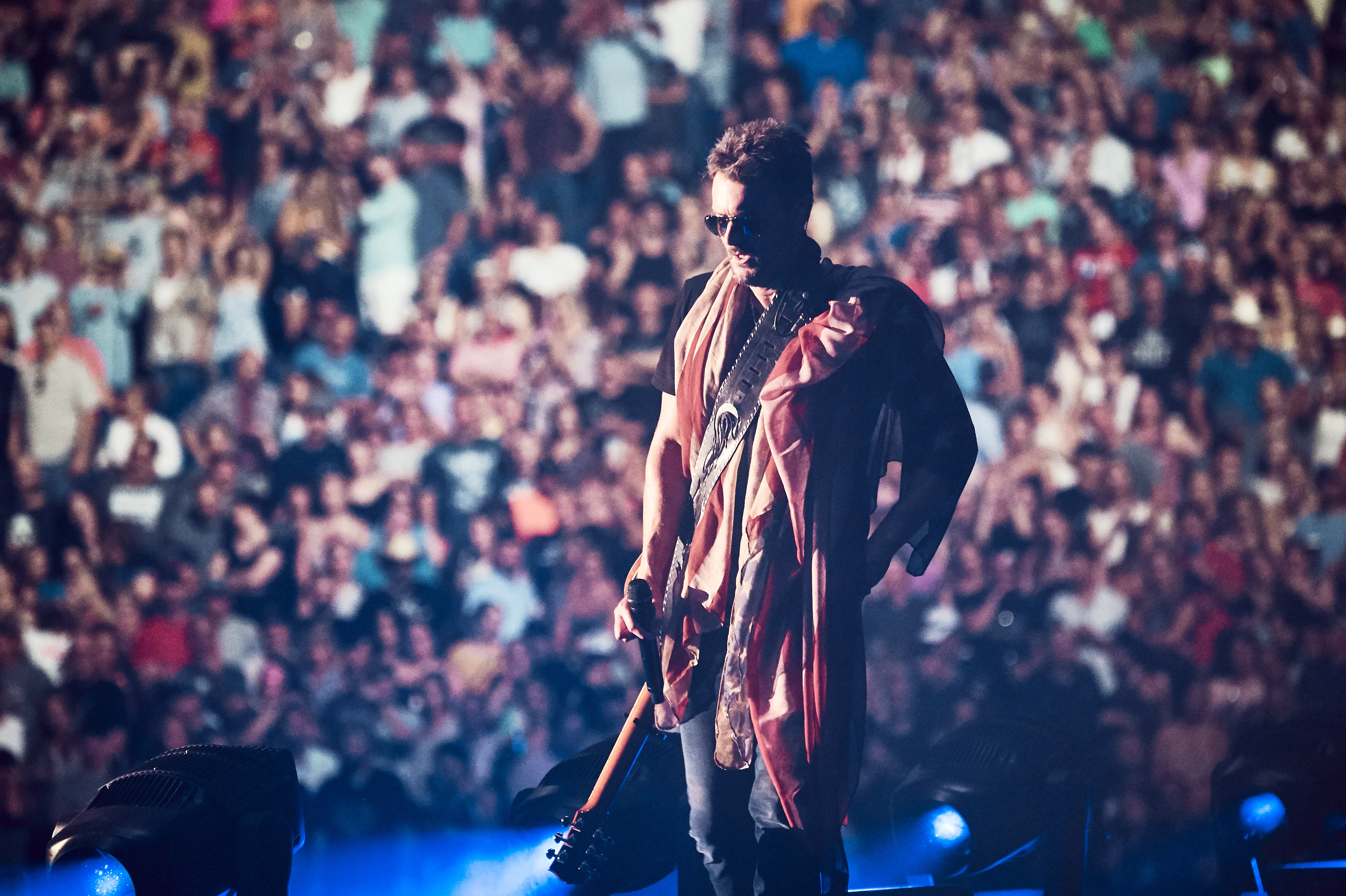 After delaying the show open to allow the new record-setting concert crowd of 56,521 fans into Nissan Stadium, multi-Platinum superstar Eric Church appeared at the end of his 50-yard-line catwalk beneath a single spotlight to set the tone for the marathon Saturday night ahead. Adorned in his trademark aviators, t-shirt and a Gibson guitar, Church opened his first headlining stadium show with “Drowning Man” before meeting powerhouse backup singer Joanna Cotten center stage for “Country Music Jesus” and what could have been the official mantra of the evening: “That’s Damn Rock & Roll.”

Church, praised by Esquire as “one of the most singular working artists in any genre,” has long done things his own way – perhaps never more evident than on his current Double Down Tour. Continuing the trend of the tour thus far, the country music renegade performed nearly four hours of music and just under 40 songs spanning the catalog of all six of his studio albums. With no opening act – making him the first artist to play Nissan Stadium alone in the venue’s 20+ year history – Church had the record-setting crowd in the palm of his chest-pounding hand the entire evening (the previous attendance record of 56,112 was set in 2018).

“I came here 15 years ago and I had dreams,” he explained of Nashville to his loyal Church Choir, “but I’m not sure I could dream this big. Tonight is a special night for me and you know this if you’ve been to any of our shows on the Double Down Tour… I’m gonna give you everything I’ve got all night long, and tonight is going to be a revival. I promise you.”

As the night went on, Church indulged the crowd with everything from hits like current single “Some Of It” – the music video directed by award-winning Reid Long having debuted on stadium screens prior to the show – and No. 1 hits “Drink In My Hand” and “Record Year” to deep album cuts including fan-favorites “Pledge Allegiance to the Hag” and “Knives of New Orleans.” His extensive catalog was evident throughout both halves of the marathon set punctuated only by a 25-minute intermission, making it no surprise that Church has earned 30 million RIAA certifications, a feat he was recognized for with a plaque presentation prior to the show.

He also paid homage to Nashville as he’s done in each tour city thus far – putting the ‘music’ in Music City with stadium-worthy covers of “Bohemian Rhapsody,” “Night Moves,” “It’s A Great Day to be Alive,” “Sweet Caroline,” “Piano Man,” “Pour Some Sugar on Me” and “I Love Rock ‘n’ Roll” during his signature “Mistress Named Music” medley. As the epic show drew to a close after midnight, Church sent the satisfied Nashville crowd into Sunday morning with an encore including his classic hit “Springsteen” – the melody sounding like a memory that is sure to remain a soundtrack to this May Saturday night for years to come.