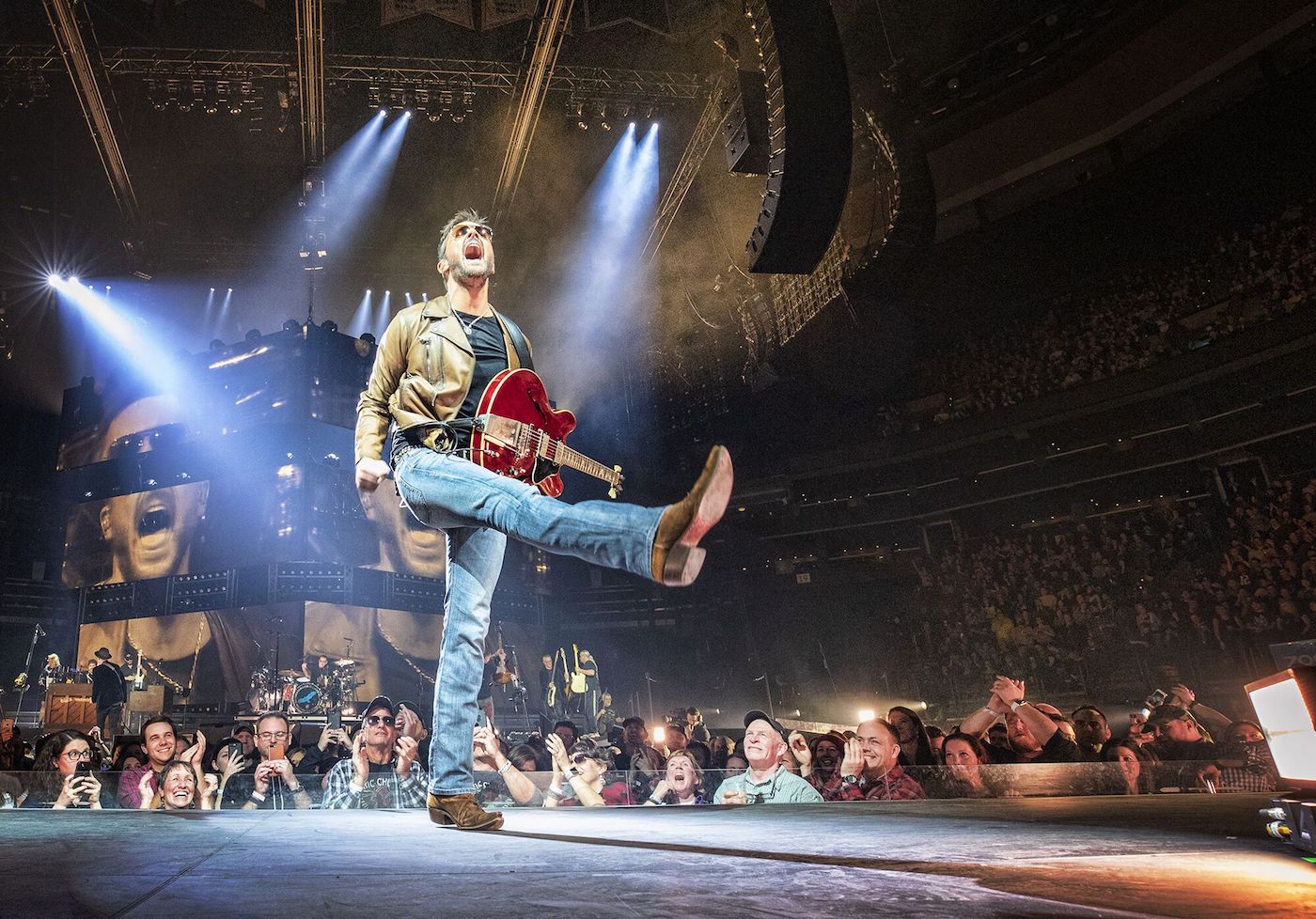 Hey everybody, it’s Eric Church back for the fifty-third episode of “Outsiders Radio.”  As I sit here today, I am proud to say that we have the #1 song in the country. I don’t make music to get #1 songs. But when all the stars collide and we get one, it’s certainly something to be proud of. Especially since this song almost didn’t make it on the album.  So I want to take the opportunity to thank everyone involved for making this song #1.

It’s been about two months since our show at Nissan Stadium in Nashville.  That show was the highlight of my career. Two weeks after that, we were back in that stadium for CMA Fest.  My band was there, we sound-checked, and the plan was to do five songs for the TV special. But I could not go out there and play five songs for TV that we had just done a few weeks before.  I knew some of our fans who had been there for the stadium show in May were back in Nashville for CMA Fest, and I wanted that passion back. The only way I knew to do it was with the Mistress medley that we do.  Every night we play Mistress Named Music and a medley of classic cover songs. But I’ve never covered ME. So about an hour & a half before the show, I told the band to go home. I wanted to do this acoustic medley for the people in the stadium and for the fans, and not for TV.  That’s what I wanted to do. It all began with this song.

So imagine the Mistress medley that we do every night with MY songs instead of the covers.  THAT’S what we did at CMA Fest this year. That was a one time thing. I’ll never play Mistress and cover 17 of my own songs.  So those of you who were there that night, you saw something special. However, because it was one continuous medley, it’s not in the TV special that airs next week.  But there are a lot of OTHER great moments from CMA Fest that I’d like to highlight, including one featuring my friend Ashley McBryde…and here she is to tell you about it.

Today was my first time to sing in a big stadium like this, and so, I get to sing with Brooks & Dunn tonight. And the band behind us is the Brothers Osborne, which is not a terrible way to spend an evening.

Brooks & Dunn with my friend Ashley McBryde on You’re Gonna Miss Me.  They do that song together on the CMA Music Fest TV show airing next Sunday night on ABC.  Also joining Brooks & Dunn on that show will be Brothers Osborne.

Its crazy, first we’re asked if we’re fans of Brooks & Dunn, and I thought that was a ridiculous question, if you’re not fans of Brooks & Dunn, you shouldn’t be in the genre. Then it was what song should we do, it was tough because Ronnie’s voice is so high, and I have a baritone, trying to figure out a song that would work for our strengths. Then Hard Workin’ Man was the obvious choice. It was crazy, we wanted to do it like Brooks & Dunn, they wanted to do it like we would do it, and the way it turned out was really great, I’m really proud of it, it’s the perfect mix of us both.

Brothers Osborne with Brooks & Dunn, and they’ll be together on the CMA Fest TV special airing next week on ABC TV.  Another collaboration features Jon Pardi with Thomas Rhett. Here’s a preview from Jon:

So me & Thomas go back to the long hair days, two songwriters trying to figure out who they’re gonna be in country music, and I was so happy when he asked me to be a part of this record. He sent me two and we picked Beer Can’t Fix, cause it’s an anthem, for two male artists to sing a song together it’s perfect, it’s about drinkin’ beer, and it’s fun, it’s a full circle for him & me tonight to walk out on Nissan and sing for the first time ever this song together, and I think it’s cool, and we have short hair.

Thomas Rhett & Jon Pardi with a song from the new Thomas Rhett album Center Point Road.  They’ll do that song together for the first time on the CMA Fest TV special next Sunday night on ABC-TV.  Another one of my friends featured on that show will be Brantley Gilbert. He joined me for the Blood Sweat & Beers tour in 2012, and is a great entertainer. He explained the importance of CMA Fest.

These fans travel, we’ve seen people from Australia today, and people from the UK, and for them all to come together in one place, you get to see the people who are passionate about you, but you meet new folks too, and these artists are here voluntarily for a great cause, and the number is up to 17 million, we’re doing it for a reason, and it’s good to get face time and hang out with everybody.

We mentioned that you probably won’t see me in next week’s CMA Fest TV special, but you WILL hear one of my songs.  That’s because I was one of the writers of Keith Urban’s current hit. Here’s a little inside information about this song.  I wrote it last year, it was one of the songs in the running for the Desperate Man album, and for whatever reason, we didn’t cut the song.  It just didn’t fit me, it didn’t matter that I wrote it or not. He told me a story that when he started dating his wife, they would jump on the back of his Harley and ride around.  There’s a line, ‘Two leather jackets, one heartbeat in the moonlight.’ And that was the line he identified with. That’s my most favorite thing about music, that’s the power of music, and he did such a great job on this song.

It means so much to me, I started out singing country music as a child and through my teenage years, I’ve never been far away from it. I consider country music, country & western music, Americana, American roots music to be just the great American story. So I’m telling that story whether I’m playing rock & roll or country or whether I’m working with Tanya or the Highwomen or the Secret Sisters, and I feel really embraced by that community right now.

As we wrap things up on this edition of Outsiders Radio I want to share this story about my friend Luke Combs.  By now you know he’s from North Carolina, and went to Appalachian State College. We met a few years ago, and he’s said a lot of nice things about me & my music.  So last month, we did a show at The Gorge in Washington State, and he came out to see us. The first day, he was hitting some golf balls off the back of the stage. When he steps down, he turned his ankle.  He’d been there an hour. But he got some medical attention, and was able to hang out for both shows, and it was great to see him, and have him there at our shows. A few weeks later, he was inducted as the newest member of the Grand Ole Opry in Nashville.  So congrats to Luke Combs on becoming an Opry member, especially so early in his career. We’ll leave you with his comments on what the Opry means to him, and we’ll see you next time on Outsiders Radio.

As far as career achievements go, to me this is the #1 thing. I mean the sold out shows are great, and those are things you strive for, but this is just an institution. To me, it’s beyond country music, it is country music, so being asked was the most amazing, overwhelming, humbling experience I’ve ever had. So it definitely always will be the #1 career achievement for me, over winning this or that. This is the thing that no one can ever take away from me, which is the thing I’m most proud of.